Gambling at Gettysburg a Historical Perspective 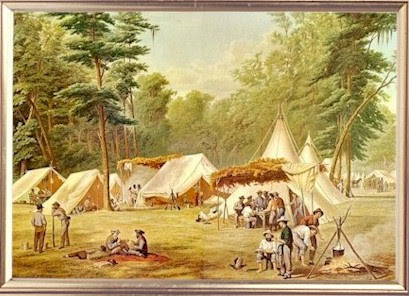 According a Mr. Monahan, a Real Estate developer turned Civil War film producer there is reason to support the Casino in Gettysburg because a friend of his has pointed out that the soldiers themselves spent their off hours playing cards. Well that settles its for me let the gambling begin. So with this historical perspective to gambling at Gettysburg in mind can we also expect to have cockfights, greyback races and "horizontal refreshments.” If so then I say let the gambling begin.

In addition to his take on gambling Mr. Monahan has just premiered a $7M dollar movie entitled "Fields of Freedom" about the battle of Gettysburg.

Dedication of the First Maine Monument and Cause Victorious

Andy
I have had a long time interest in history especially America in the 19th Century including the Civil Was. I live in Central Mass. I am lucky enough to share life with my wife, 3yr old son and two dogs.